Cicada Hijinks Are an American Tradition

The story sounds ridiculous, but it’s true: A man in Ohio recently drove his car into a utility pole after a cicada flew through his open window and smacked into his face. He was fine! The car, not so much.

The Brood X cicadas have certainly made their presence known over the past several weeks: their ceaseless screeching from the treetops, their slow, meandering manner of flying around, sometimes right into us. Last week, a plane carrying journalists who were accompanying President Joe Biden on his trip to Europe was delayed for more than five hours at a Virginia airport because of “mechanical problems caused by the cicadas.” Biden himself was not spared; standing on the tarmac before boarding his own plane, the president discovered a cicada crawling on his neck and swatted it away.

Strange cicada-related encounters seem to occur with every 17-year emergence of Brood X, as clockwork as the invasion itself, according to Gaye Williams, an entomologist at the Maryland Department of Agriculture. Williams keeps a file drawer full of quirky cicada tales going back to 1987. She has spent the past several weeks getting to know the cicadas in her backyard, taking decibel readings of their constant buzzing, and trying to stop her dog, Penelope, from gorging on the bugs. “All these animals want to do is what we want to do: They want to grow up, party, have kids,” Williams told me. I get it! But when they’re here, they’re everywhere. The sheer numbers are a great survival strategy for the species—with so many cicadas out all at once, predators can’t catch them all—but they’re also a recipe for weird run-ins with humans. And there are plenty of stories to prove it.

[Read: Cicadas have an existential problem]

Drivers like the man in Ohio are especially susceptible to cicada hijinks. In 1987, a man in Virginia also slammed his car into a utility pole after a cicada flew into his face. He wasn’t injured, but the incident caused $20,000 in damage and temporarily knocked out power to 50 homes, according to a Washington Post story from that year. In 2004, a similar intrusion caused a woman in Baltimore to crash her car into a fire hydrant. In her attempts to swat the bug away, the woman told The Washington Times, “I took both hands off the steering wheel.” She was unharmed, and the crash’s only victims were a couple of the neighbors’ flowers, which were washed away by the water spraying from the destroyed hydrant.

And then there are the self-owns. In 1987, the Chicago Tribune described a rash of cicada-related accidents among, as the reporter put it, “the youths”: One youngster who tried to squash a cicada under the tire of a slowly moving car ended up getting his hand run over, and another who tried to swing a baseball bat at one of the bugs hit a friend instead. One youngster “attempted to stab a cicada with a pocket knife and accidentally stabbed” someone else.

At every emergence, people become intrigued enough by cicadas to eat them—hey, free source of protein!—and sometimes take their curiosity too far. In 2004, a man in Indiana broke out in head-to-toe hives after consuming nearly 30 cicadas. When he showed up to a clinic, he “sheepishly told a doctor he’d caught and ate the cicadas after sauteing them in butter with crushed garlic and basil,” according to the Associated Press. Doctors treated him with antihistamines and sent him home later that day. It turned out that the man had a shellfish allergy, which was a problem because cicadas are a distant relative of shrimp and lobsters. Earlier this month, as cicada recipes popped up across the internet, the FDA warned people with seafood allergies to keep the bugs off their plate.

[Read: Restaurants have a new problem, and it has red eyes and is super loud]

Sometimes cicada hijinks get downright absurd. In 1987, two men burst into a Cincinnati restaurant and thrust a single cicada at the cashier. Grossed out by the bug, she fled. When she returned, she found that the register was missing $25. So far, this year has had no reports of cicada incidents quite that wild, and the window is closing. The insects are already dying off, their long-awaited task complete, and in early July, Brood X will disappear once again. The eggs they burrowed into tree branches will eventually transform into nymphs and fall to the ground, beginning their journey into the depths for their own 17-year wait. We will file away the absurd stories from our shared existence this summer, ready to resurface them during the next emergence, when—if history is any indication—new hijinks are bound to happen. The cycle—theirs, a loud act of survival; ours, a loud act of trying to swat them away—will continue.

Some of us might try to ask future generations to learn from our mistakes; in 1970, after students at a Baltimore school were bombarded by cicadas during their outdoor graduation ceremony, the headmistress wrote a letter to future school officials—“To whom it may concern in June 1987,” it began—asking them to keep things indoors next time. If this summer’s frazzled drivers could warn people in 2038, they’d probably advise them to roll up their windows. 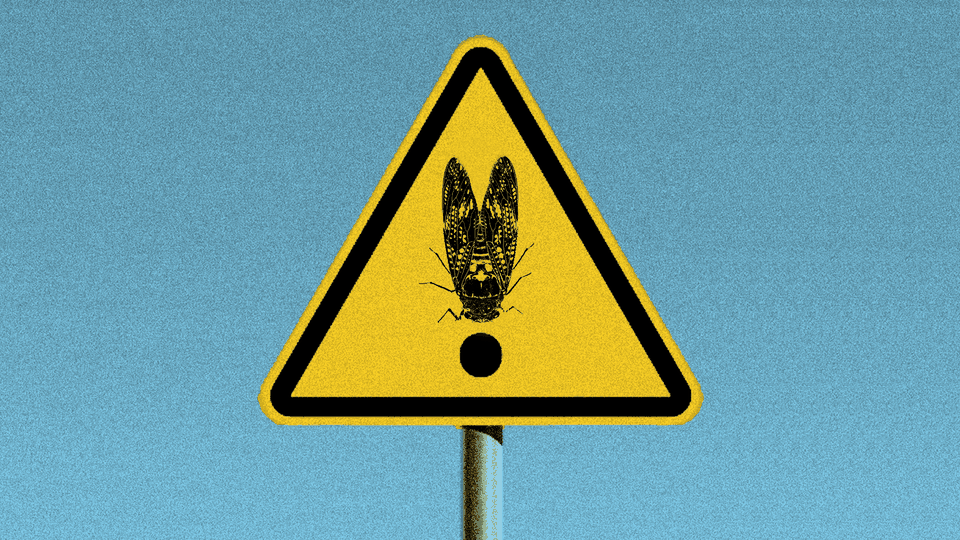