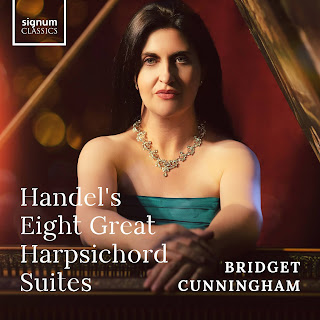 Performing at the keyboard (whether harpsichord or organ) was an important part of both Handel and Bach's performing lives, yet their legacy as keyboard composers is very different. Both were great improvisors. For Handel, improvisation was an essential part of his compositional make-up, much of his keyboard music that survives in manuscript needs the application of a creative imagination to bring it to performance, and even published works need ornamentation and elaboration. With Bach, though he improvised, his composed works have a greater worked-through element to them, perhaps because there was often a strong didactic element to Bach's art, creating important exemplars.

Perhaps for this reason, major keyboard players have not been in a hurry to record Handel's keyboard works. Now the tide seems to be turning, thankfully. Last year, French harpsichordist Pierre Hantaï recorded four of Handel's 1720 keyboard suites [see my review], and now Bridget Cunningham has recorded Handel's complete 1720 Suites de Pièces on Signum Classics, along with a selection of the composer's operatic arrangements.

Cunningham's two-disc set is issued as part of her continuing Handel series on Signum with her London Early Opera, but the set also celebrates the 300th anniversary of the printing of Handel's Suites de Pièces in November 1720.

After Handel's successful, almost triumphant, series of operas for London from Rinaldo in 1711 to Amadigi di Gaula in 1715, there is then five years of near operatic silence, just a handful of revivals. Perhaps the operatic form was not yet as important to the composer as it would become, perhaps the chaotic nature of opera production in London mitigated against anything happening. Whatever the reasons, in 1717 he became house composer for the James Bridges, Earl of  Carnarvon (later Duke of Chandos) and whilst this period is notable for works such as the Chandos Anthems, Acis and Galatea and Esther, there was instrumental music too. The Earl employed a group of distinguished musicians, and Handel almost certainly wrote plenty of music for them. His harpsichord suites date from this period, presumably written partly to entertain and dazzle the Earl and his guests, but also because the period gave Handel time to devote himself to this particular form.

In 1719, the Royal Academy of Music was created with Handel as one of its composers, and his opera Radamisto would premiered in 1720. From then on opera would be Handel's main focus for the next 20 years. The keyboard suites might simply have been put in a drawer, except that in Amsterdam a pirate edition of some of his earlier keyboard music was published. Handel not only had a keen commercial eye, but was quick to stamp on copyright issues; as the copyright legislation of the time was primitive, his solution was usually to create something bigger and better. So in 1720 he arranged the publication of the eight Suites de Pièces, to steal a march on any pirate rivals. The publication was a success, with several editions circulation throughout Northern Europe.

Whereas there seems to have been a didactic element to Bach's suites in the way he uses existing forms yet writes often in a daring way, Handel takes a freer view of structure. With Handel, a suite seems to have been whatever he wanted it to be. So the first suite is a classic sequence of dance movements, but the second suite has no dances in it at all and is closer to an Italian sonata whilst the dances of the third give way to a huge air and variations. The fifth suite has another set of variations, popular known as 'The Harmonious Blacksmith'. In terms of movements, the suites vary from four to six, with the six-movement seventh being perhaps the most substantial, ending with a glorious Passacaille which takes us firmly into France.

At the time Handel was his house composer, the Earl of Carnarvon owned a magnificent two-manual Ruckers harpsichord. The catalogue of the Duke of Chandos' instruments drawn up in 1720 lists "A four square Harpsicord with two Rows of Keys at one End and a Spinet on the side made at Antwerp by John Ruckers, the Lid is painted and represents the Mount Parnassus with the nine Muses and Minerva coming to instruct them, painted by A Tilens in the year 1625", and at the time of the sale of the estate the instrument was in the duke's study, it can be traced through sales in 1785 and 1787 but then disappears from the historical records. [This information and much more can be found in Peter Holman's article Handel’s harpsichords revisited Part I: Handel and Ruckers harpsichords published in Early Music, Volume 49, Issue 2, May 2021 https://doi.org/10.1093/em/caab027].

Throughout his life in London, Handel does not seem to have stinted himself when it came to the quality of his instruments (and he owned a number including a large Ruckers). Cunningham follows suit and plays on Johannes Ruckers-style double-manual harpsichord copy built by Andrew Wooderson. The temperament used, Neidhardt (1732), ensures that the sixth suite, in F sharp minor, has all the dark danger that you might expect from that remote key. Throughout the disc the sound of the instrument contributes greatly to the success of the performances, it has a strong, characterful sound, quite direct and without overmuch texture which means the music speaks strongly.

Handel might have edited this music for publication, but there is still a lot for the performer to decide and Cunningham brings a lively imagination and dynamism to her use of ornaments. She relishes the sheer variety of Handel's music in these suites, giving each movement its character. Some are dense, and when he wanted Handel could write a cracking fugue, but many require the harpsichord to sing and Cunningham's style and ornamentation are key here. The music wasn't designed to be listened to at one sitting, but I have done that a few times and it never palls.

Some of the music in the suites will be familiar from other places, as Handel has as usual re-used material (though the third suite is largely written from scratch), and as a treat at the end of the recital Cunningham extends this and gives us a selection of Handel's harpsichord arrangements of music from his operas, the overture and two arias from Muzio Scevola, arias from Floridante and Radamisto and the overture to Riccardo Primo.

John Walsh published a second Suites de Pieces in 1733, though most of the material pre-dates the 1720 publication and Walsh's printing is slap-dash and haphazard. Within this collection is Handel's Chaconne in G major, but this movement has quite a complex history and Cunningham ends the recital with the significantly different final version. At over 11 minutes it is the longest movement on the disc, elaborate and brilliant, a fine way to end the recital.

Never miss out on future posts by following us

The blog is free, but I'd be delighted if you were to show your appreciation by buying me a coffee.

Elsewhere on this blog