Cartuja Monastery – A Jewel of Spanish Baroque in Granada

Cartuja Monastery is one of those places that is always on my to do list. It´s not so easy to get to on public transport. The monument is a way out of the historic centre of Granada. The Monasterio de la Cartuja is on the main road from Granada to Alfacar. (close to the University Campus of Cartuja)

This institution dates back to the 1500´s in Granada and has French origins. Let´s take a closer look at this Carthusian Monastery. 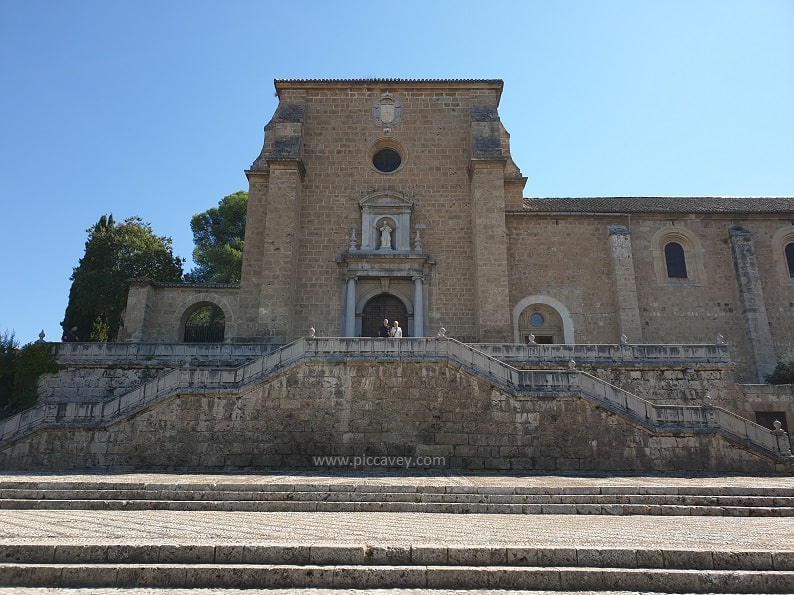 Founded by Bruno of Cologne in June 1084. The Carthusian order began in Saint Pierre de Chartreuse, close to Grenoble France. The building, now the Musée Grande Chartreuse can be visited, in this remote and idyllic corner of the Isere Valley.

As the Carthusian order grew, the monks looked for new monasteries. Bruno of Cologne opened a second Charterhouse in Calabria Italy in the year 1100. After his death in 1101, more Charterhouses were opened up. In Spain, France and beyond. 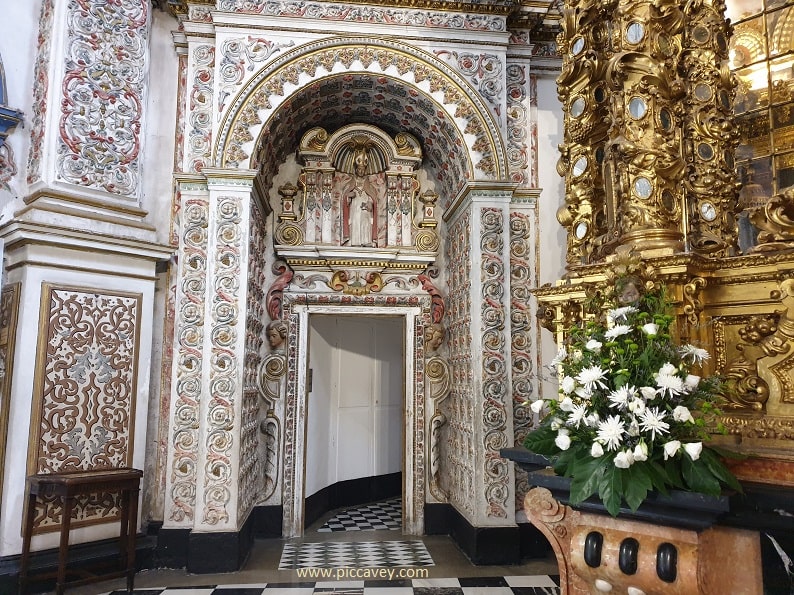 The Carthusian order was keen on locations away from towns and cities. The monks looked for peacefulness and isolation for contemplation and prayer. This location away from the busy city of Granada was in a countryside setting at the time. This site had monks living here for hundreds of years. From the early 1500´s right up until 1835. 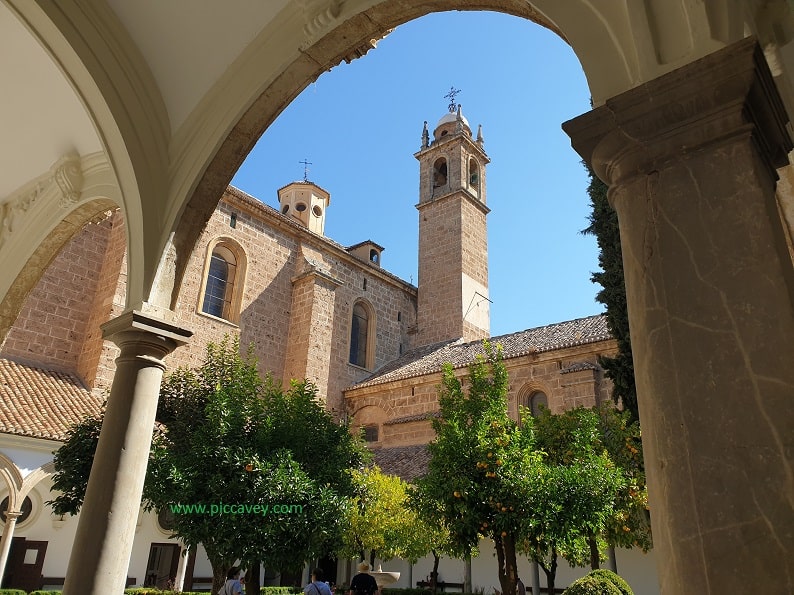 Once you get inside the monastery the first thing you will see is the beautiful cloister. With its central fountain, orange and quince trees, it really is a calming setting. The layout of the building allows access to all rooms from the Cloister.

From the Cloister garden you can follow the guided tour through your smartphone. (Download the app when you arrive, following instructions on the entrance wall)

This routes guide us through the building along the smooth timeworn flagstones. First we come to a small area with an altar. This is where the Carthusian monks would have washed before entering the dining room. Then continuing on into the refectory. This is the oldest part of the Charterhouse dating back to 1531. 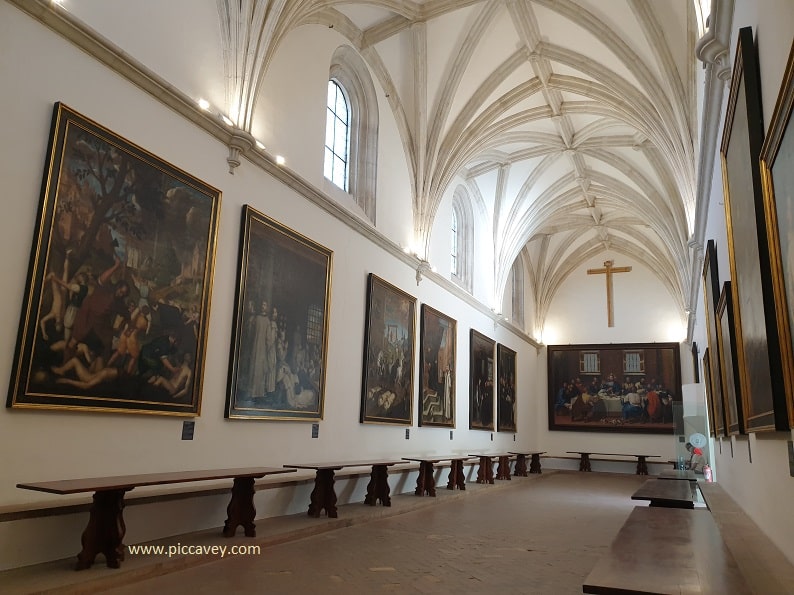 Of note are the paintings by Fray Juan Sánchez Cotán that line the refectory walls.  These works of art outline the daily life of the Carthusian monks at the time.

This Cartuja Monastery is one of the best examples of Spanish Baroque architecture remaining today. Even though it was been alt

ered over the years. For example the rooms where the monks would have slept are no longer there. The cloister is smaller than it would have been in it´s day. 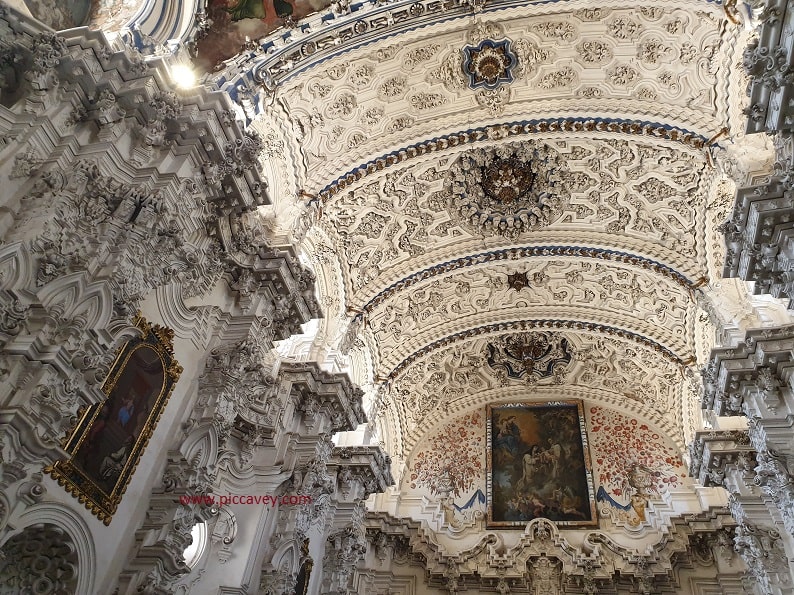 The most impressive parts of the building are the Church and the Sacristy which were built in the 16th and 17th centuries. 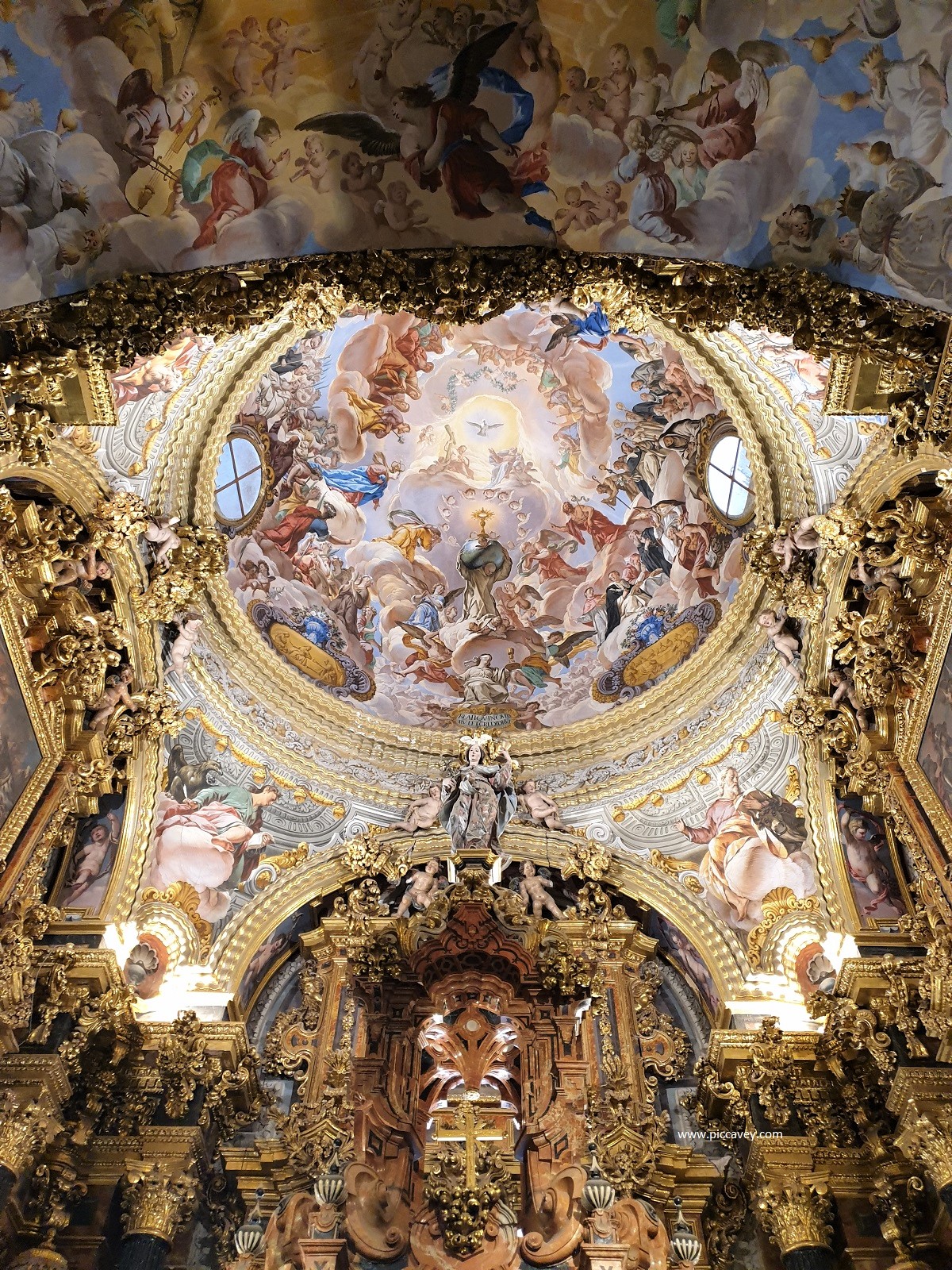 Despite my best efforts the photos of the grandeur inside don´t quite seem to do it justice. The Sacristy and Church Altar are just spectacular. It takes a while standing to take time to view each part in an attempt to take in all the detail. The colours are vibrant. The delicate marble and wooden designs are intricately carved and carefully preserved.

Compared with the stark exterior of the building its a huge contrast on the inside. 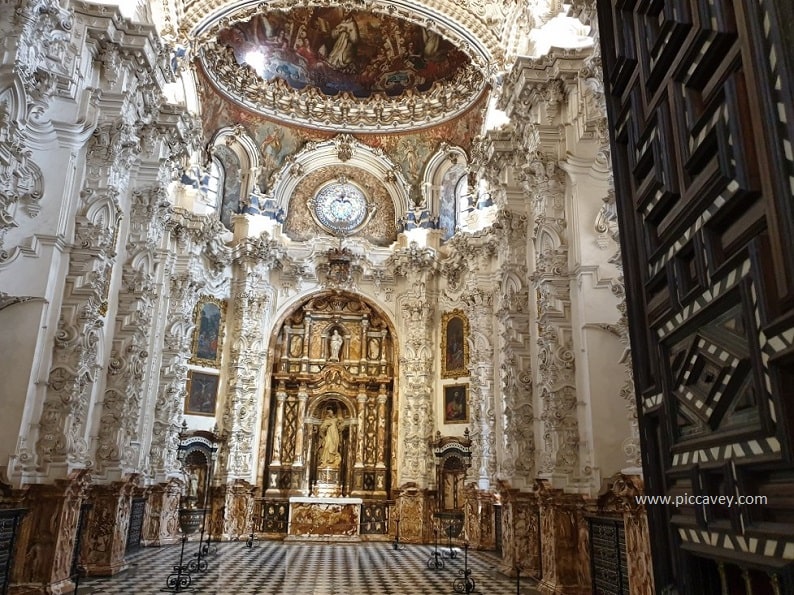 This is not the only remaining Cartuja Monastery in Spain. These are still inhabited. 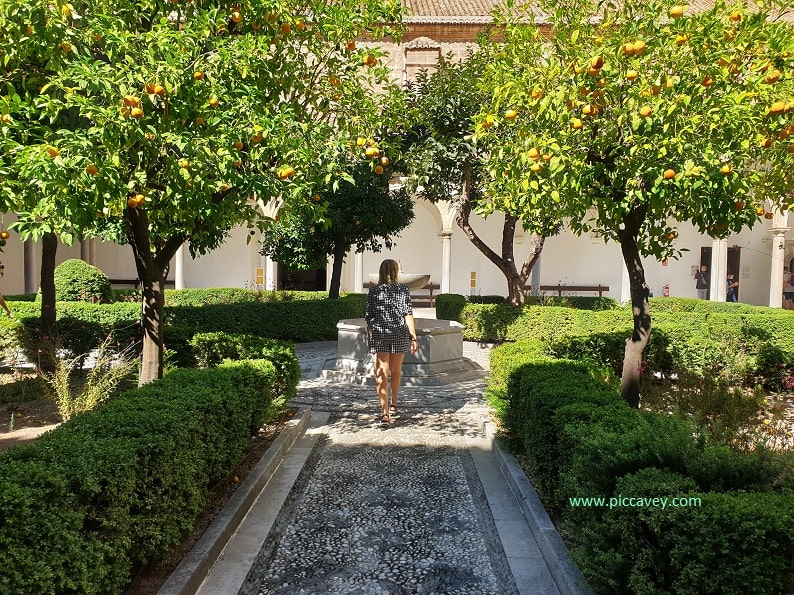 As I left the Monasterio de la Cartuja something caught my attention in the small shop on my way out. A sign Reading: Hay Rosarios de Petalos de Rosa. I didn´t know what that meant so I went off to investigate. It turns out that here they sell Rosary beads as well as other souvenirs. However these beads are quite special. Made by convent nuns in Spain the Rosary is made from of real rose petals. It seems that they roll the petals together tightly until they form a ball.

The final result of this delicate task is a Rosary in a coral red color, with the beads retaining their natural rose scent. So as the lady in the shop shows me the ítem, when opening the small keepsake box a beautiful rose perfume arises from the coloured beads. The white one shown in the photo is the one I bought. It was made from Jasmine petals. The scent is just like the fragrance of an Andalusian Summer evening with the heady scent of Jasmine in the air. It´s a real treasure to have in my drawer at home. It would make an unusual souvenir or gift for someone too. 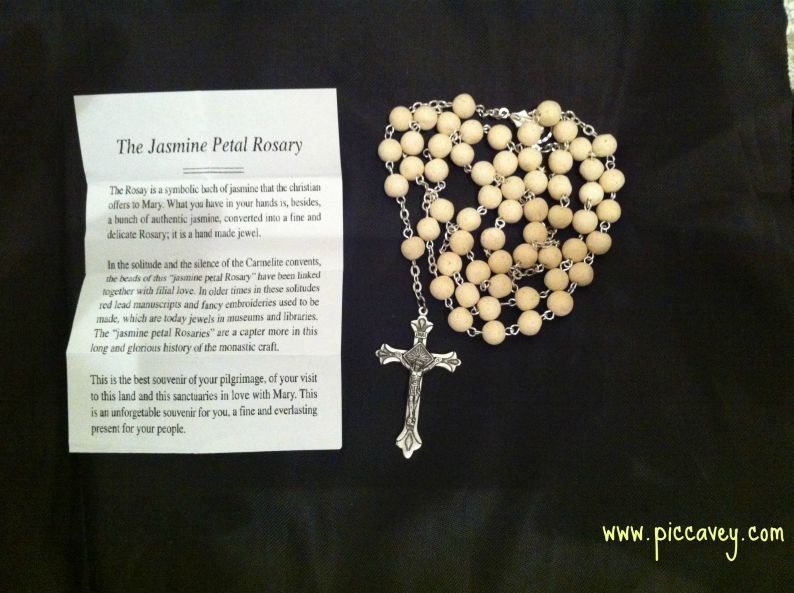 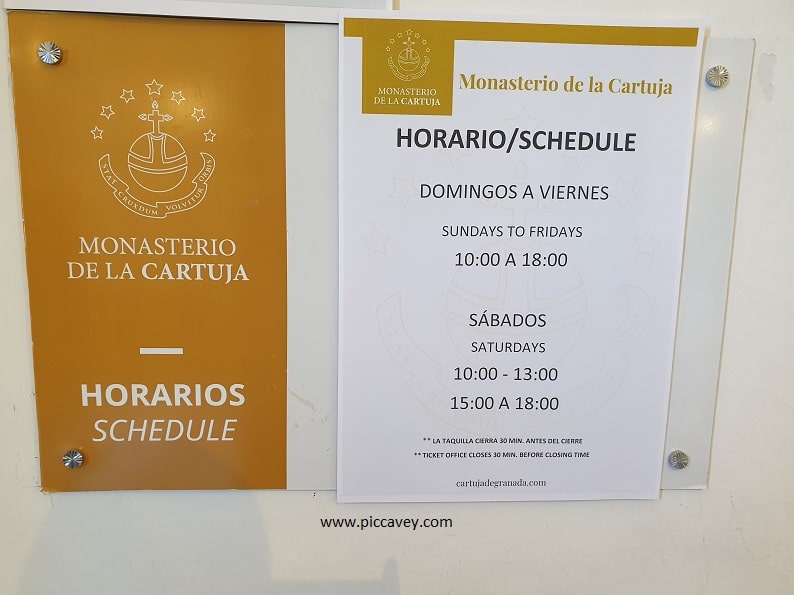 The post Cartuja Monastery – A Jewel of Spanish Baroque in Granada appeared first on Piccavey.