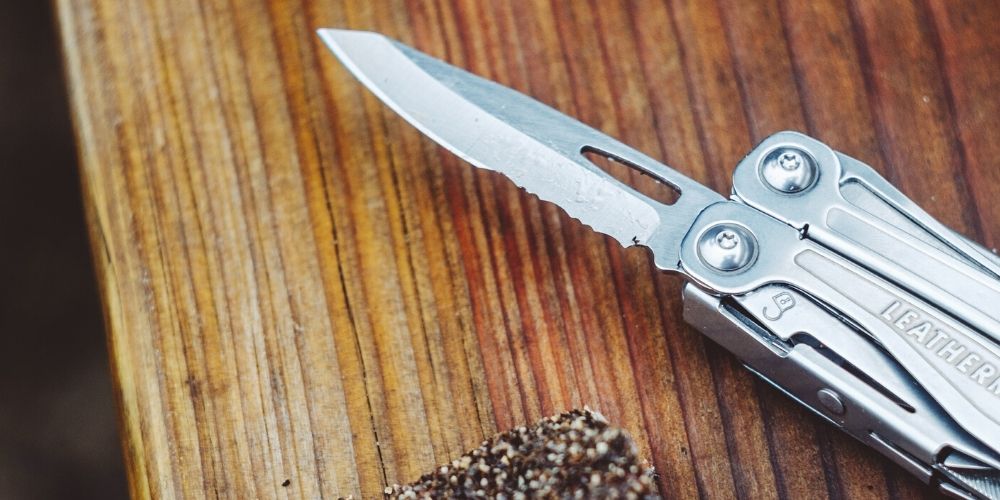 Beloved by handymen, tradesmen, travelers, and survivalists alike, theres no doubt that multi-tools are some of the most versatile and useful hand tools ever created. Imagine having almost every tool you need right in the palm of your hand while youre traveling, camping, hiking, or biking. Plus, thanks to the creation of multi-tools, you dont have to carry your heavy toolbox or tool bag to do some minor maintenance work around your house or vehicle. It is even a great tool to have during basement or kitchen remodeling projects.

It might seem that multi-tools are fairly modern innovations, but history shows that it has been around since about AD 200-300. The oldest known multi-tool is this Swiss Army knife carried around (and presumably lost) by a Roman traveler.

The tool, which is now housed in the Fitzwilliam Museum Cambridge, is made of silver and iron. The utensils included are very basic. It has a spoon, knife, and fork. It also has a spatula, a spike, and a pick (historians reckon that it might have been used as a toothpick).

Most of the time, less is more. You might have a multi-tool equipped with ten tools or more, but it can be heavy and bulky. Plus, lets face it. You dont always use most of the tools in your old multi-tool, so theres no use carrying it around.

The Leatherman Skeletool Lightweight Multitool is the pared-down version of the Leathermans Skeletool line. All the essentials are here. You have the pliers, wire cutters, knife, and large bit drivertools that will certainly come in handy whether youre a professional electrician, a DIY enthusiast, or you simply love hiking and camping over the weekend.

It only weighs 5 oz. so you can easily slip it inside your jean pocket or one of the pockets of your backpack. You can even hook it around your belt thanks to its secure carabiner that also doubles as a bottle opener. Plus, its knife also allows easy one-hand access.

With its affordable price and impressive quality, the Leatherman Skeletool Lightweight Multitool is a great addition to your tool arsenal.

The Leatherman Surge Heavy Duty Multitool puts other multi-tools to shame with its multitude of tools. These tools include regular and needle nose pliers, three types of wire-cutters, electrical crimper, and wire strippers. It also has one smooth knife and a serrated knife.

This multi-tool also has an awl, saw, ruler, scissors, and ruler. Campers, hikers, and mountaineers will love its handy can opener and bottle opener. Other tools included are two files, a bit driver, two screwdrivers, and a Blade Exchanger.

This is an impressive and must-have tool for homeowners, adventurers, and tradesmen as it has every tool you ever needed. Plus, it is made by Leatherman, so you know that this multi-tool will last for many years. You might not need to bring your toolbox with you ever again if you have this multi-tool.

Ive sung this multi-tools praises up to this point, but that doesnt mean it doesnt have some things I dont like. As I mentioned, its too bulky that its going to feel like youre carrying a rock inside your pocket. If youre bothered by its weight and its bulk, then keep it inside your car or drawer at work or somewhere you can always have access to it.

The Gerber Suspension Multi-Plier Multi Tool is a good multi-tool to have in your arsenal. It has almost everything you need if you dont have your toolbox with you, such as the needle nose pliers, wire cutter, saw, scissors, and screwdrivers.

It even has flat drivers, a can opener, a bottle opener, and two types of knives (smooth and serrated). You cant replace your tool bag or toolbox with it, but it will do for emergency or ad hoc repairs around the house. It is also a good tool to have during camping, hiking, or fishing when space comes at a premium.

The smooth blade is ultra-sharp, but the serrated blades are just so-so. Its contoured sides ensure a comfortable grip. It comes with a nylon pouch to protect the tool from dust and debris.

Say hello to the king of multi-tools. The Victorinox SwissChamp Swiss Army Multi-Tool has all the standard tools many handymen, servicemen, adventurers, and homeowners need. These include the knives, screwdrivers, wire strippers, wood saw, pliers, wire-cutter, and wire crimper.

But it also has some features that mountaineers, hikers, hunters, campers, survivalists, or ordinary homeowners need (such as the bottle opener, can opener, toothpick, fish scaler, and more).

It has 33 functions, but the good news is that it is one of the most affordable multi-tools in the list.

Its not quite on par with the Victorinox SwissChamp or the Leatherman Surge when it comes to the number of tools in its arsenal, but the SOG PowerAccess Deluxe Multitool can hold its own. This compact tool is equipped with pliers, an assortment of screwdrivers, wire cutters, and other essential tools for homeowners, professionals, and even adventurers alike. It even has a bottle and can opener for folks who like to go camping or hiking.

This multi-tool is one of the most compact and lightweight on the list. It does feel flimsy sometimes, so consider that before buying.

The handle is not designed to be ergonomic. There are some barely noticeable notches on the handle, but youll feel these small indentations if youre squeezing the handle too hard or pulling something.

Theres room for improvement, but overall, this is a good multi-tool.

The DeWalt DWHT71843 16-in-1 Multi-Tool has a very basic set of tools, but that doesnt mean you wont find any uses for it. There will be plenty of instances where you will find yourself reaching for this tool as it comes with an assortment of screwdrivers, Phillips screwdriver, and a wire stripper. It also comes with spring-loaded pliers, wire-cutters, and spring-loaded needle-nose pliers.

It also has a short and sharp blade that is perfect cutting thin tree branches or pipes. Other features include a ruler, a lanyard hole, and even a wood and metal file. It is ideal for minor maintenance projects around the house or somewhere else when you dont have access to your toolbox or tool bag.

But this multi-tool is not DeWalts best product. It will do for minor or unexpected projects now and then, but youre better off looking at other brands if you want something better.

Whether youre cutting a tree branch, cutting wires, or maintaining your bike, youll find this Wetols 21-in-1 Multi Tool handy. It has everything you need for whenever you cant access your toolbox or you just want a reliable set of tools for camping or traveling.

It has needle-nose and end-cutting pliers, plain edge blades, a saw, and a file that doubles as a ruler. It also has an awl, multiple screwdrivers, and even comes with eight hexagonal bits. The bottle and can openers are a nice finishing touch to this tool.

Multi-Tools In The Modern Era

It was not until the late 19th century that multi-tools appeared as we now know it. The modern Swiss Army knife was pioneered by a Swiss cutler named Karl Elsener. Production of the first Swiss army knives began in 1891 in Ibach, Switzerland after the Swiss Army asked Elsener to invent something that would integrate standard army tools, such as a knife, a reamer, a screwdriver, and a can opener.

The rest, as they say, is history. The popularity of the Swiss army knife and Elseners business grew until it eventually evolved into the company that we now know as Victorinox. (The company was named after Carls mother Victoria. Her name was combined with Inox or stainless steel.)

But it was not the only company that produced the Swiss Army knife in Switzerland. It was followed by Paul Boechat & Cie in 1893, a company that would eventually be known as Wenger.

The two companies dominated the multi-tool market and settled in a comfortable rivalry for the next century. It was not until 1983 when an Oregon-based company called Leatherman upended the domination of Victorinox and Wenger in the multi-tool arena.

The first multi-tool that was not produced by either Victorinox or Wenger was Leathermans Pocket Survival Tool (PST). It was a departure from the regular Swiss army knife design thanks to the inclusion of pliers and wire cutters. Instead of the compact single casing which the Swiss army knife was known for, the Leatherman multi-tool has a butterfly casing that resembles a balisong.

Parts of a Basic Multi-Tool

Multi-tools have come a long way since the inception of the Swiss Army knife, and modern designers have added new tools into the mix. Basic tools, however, remain at the core of multi-tools. So, what are these basic tools?

Knife the blade of multi-tools can come smooth or serrated. Some multi-tools, like this DeWalt multi-tool, has a combination of the plain-edged and serrated blade. You can cut a lot of things with multi-tool knives, including food, rope, fabric, paper, wood, and more.

Saw many multi-tools are equipped with saws. The serrated blade is ideal for cutting thin tree branches, plywood, plastic pipes, and more.

Awl this is a pointed tool used to punch holes into plastic, wood, or leather.

Can and Bottle Openers the lifesaver for many mountaineers, hikers, campers, recreational fishers, and even ordinary homeowners. What better way to cap an adventure or the end of a project than opening a bottle of beer with your handy multi-tools bottle opener?

Some of the tools youll find in other models include:

Check out this page for more exciting and helpful articles to read.

There you have it. Our rundown of the 7 best multi-tools available online. But of course, this review is incomplete without giving you my favorite multi-tool on the list.

In my opinion, the best multi-tool right now is the Leatherman Skeletool Lightweight Multitool. Other tools on the list have 16, 21, and even 33 tools. This particular multi-tool only has seven, including the basic knife, large bit driver, wire cutters, pliers, and carabiner/bottle opener. But that doesnt mean that this Leatherman multi-tool cant stand up against its rivals when it comes to performance and durability.

This multi-tool is made of long-wearing stainless steel that can withstand regular use. It is designed to be compact and has a butterfly design that neatly encases all the tools inside when they are not in use. Youll barely feel this lightweight multi-tool even when you slip it inside the pocket of your jeans or cargo pants.

The quality and performance of this Leatherman multi-tool are superb and impressive, but it has an affordable price tag. This is an ideal gift for yourself or somebody else.

Other Great Articles to Read: